Sign In
Turn on suggestions
Auto-suggest helps you quickly narrow down your search results by suggesting possible matches as you type.
Showing results for
Search instead for
Did you mean:
Article Options
How to easily deploy and configure Infoscale using Ansible
VineetMishra
Employee

Ansible is a popular configuration management tool that automates configuration and deployment operations in your environment. Ansible playbooks are files written in YAML format, which contains human-readable code. Ansible playbooks are used to define operations in your environment to ensure that they are repeatable and to minimize the overhead required for IT operations.

Veritas now provides Ansible modules that can be used in Ansible playbooks to install InfoScale, configure clusters, and features like disk groups/volumes creation and its VCS resources.

Supported platforms: You can use Ansible to deploy and configure InfoScale on all Red Hat and Windows versions supported by InfoScale.

Refer to the following link to download the Ansible modules, playbook templates, and user guide for using Ansible for InfoScale deployment and configuration.

Download and save the Ansible module to the following location on your Ansible server or the customized path where modules should be copied. /usr/share/ansible/plugins/modules/

Below is the Architecture of the Ansible playbook run.

Running the Ansible module for InfoScale

Playbooks downloaded from the Veritas SORT site are the templates that should be populated with actual values as per your environment. Once the playbooks are correctly populated with values, you can run the ‘ansible-playbook’ command to achieve the specific task to get completed from the command line, as shown in the below images.

Playbooks can be utilized as per the user’s environment under Ansible tower or bypassing other extra variables from the command line. 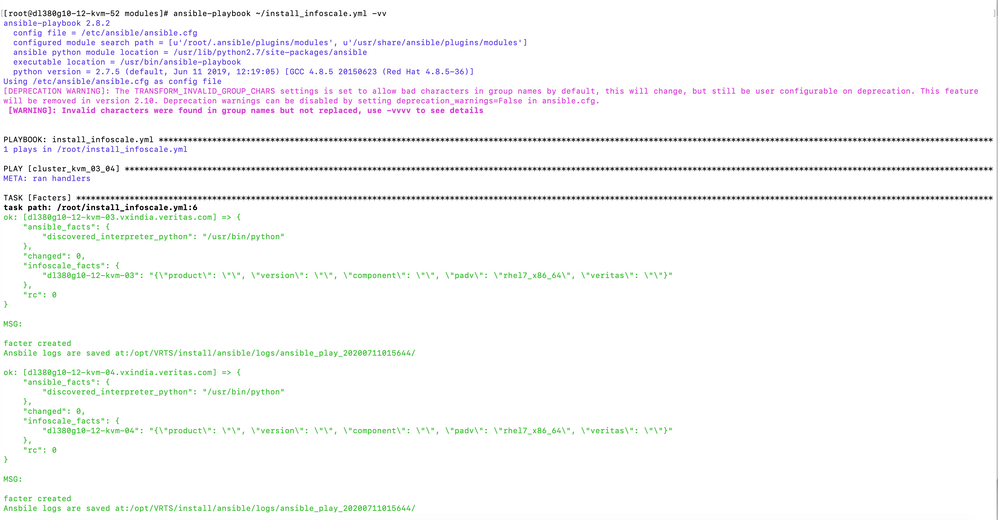 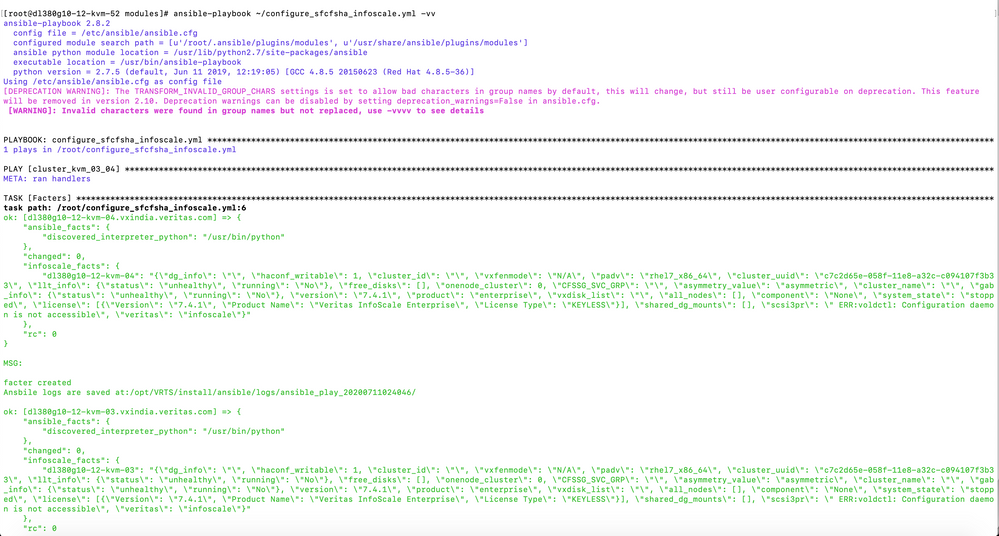 The tables below show the list of specific InfoScale features supported on Linux and Windows versions.

Table 1. Linux: Operations that can be performed by using Ansible

Table 2. Windows: Operations that can be performed by using Ansible

Using Ansible playbooks to install and upgrade InfoScale is an excellent way to reduce administration overhead and simplify operations.  With Ansible, you can automate the InfoScale install and upgrade processes, as well as many common configuration operations.  This leads to a smooth and error-free experience that makes it fast and easy to use InfoScale as your solution for enabling ‘always-on’ mission-critical applications.