Containers bring portability to the table, as well as ease of deploying and managing software as a service. Here we discuss how to pull Veritas HyperScale image and have an enterprise grade storage service available for containerized applications on a server farm.

Veritas HyperScale has a unique architecture that separates the performance sensitive computation from secondary storage processing into separate planes - compute and data plane as shown below. So before starting the server farm one needs to have servers separated out into these two planes. 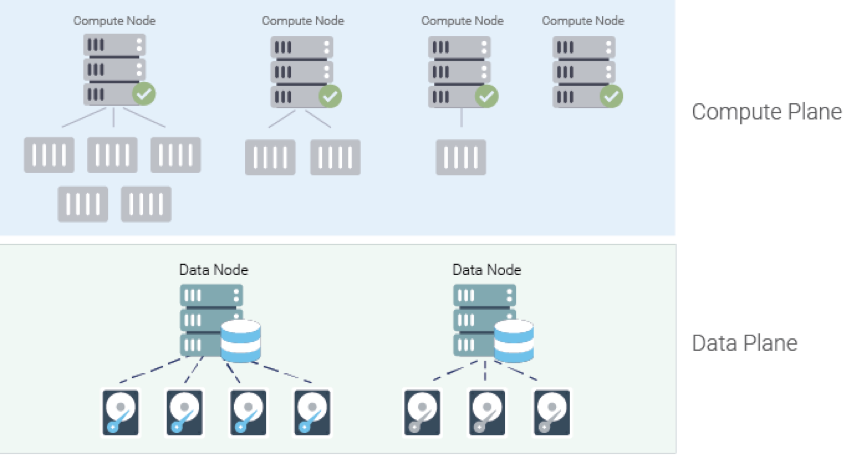 For deploying HyperScale cluster, an instance of HyperScale needs to be started on each server in the server farm and depending on which plane the service is started a different set of micro-services is launched.

HyperScale is not too demanding on the server farm configuration and it adjusts based on the available system resources. The performance output depends on the capabilities of the configuration. However a few basic things are required.

One more thing, just like any container orchestrator solution, HyperScale requires leader/manager nodes of its cluster that can persistently store the cluster configuration. So in your deployment it’s recommended to have a small odd number of leader nodes.

That’s it. You can login and manage your HyperScale installation from a web browser at https://<any-server>:14161 and using the any Docker user credentials on the server.

HyperScale creates a docker macvlan over the Ethernet interfaces mentioned during the installation and builds the private interconnect for data transfer between the various HyperScale service instances.

The uninstall step is also easy, just follow step #3 above and specify uninstall instead of install.

Do let us know how easy HyperScale was able to slip into your existing container infrastructure and provide enterprise grade storage functionalities.