Backup Exec 16 in AWS cloud with agents on local site

Please help if you can. I currently have an AWS VPC with a bunch of servers. Backup exec 16 is installed on one of those servers and is sucessfully backing up all the other servers in the cloud to an s3 bucket.. Nice!

What I want now is for our backup exec server in the cloud to backup some servers on our local site.

I can sucessfully TELNET to port 10000 from local site to AWS backup exec server so I know the ports are open and the server is accessible.

I have also ticked the backup exec network and security setting to allow use of any available network interface, subnets or protocol...

I tried to install the local agent manually on one of my local site servers by entering the public IP of the backup exec server. I enter the use name and password and click ok and after a few minutes I get an error: 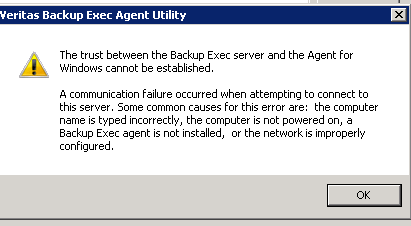 Im struggling to work out why the local server agent cannot connect to the remote backup exec server when otherwise the two server can communicate via pinging and telent etc.

Any suggestions would be appreciated, thank you :)

Thank you so much for your reply, it has been really helpful. We are currently configuring the VPN too.