Sign In
Turn on suggestions
Auto-suggest helps you quickly narrow down your search results by suggesting possible matches as you type.
Showing results for
Search instead for
Did you mean:
Article Options
Backup Exec and Instant GRT
ManojNisal
Employee

With each passing day, the amount of data being backed up increases gradually. Backup administrators are finding it hard to protect the environment in the stipulated backup window. This is where Backup Exec’s Instant GRT feature comes into play.

What is Instant GRT?

Instant Granular Recovery Technology (GRT) is a simple yet powerful feature that allows users to create GRT-enabled backup jobs that capture only the minimum information necessary for cataloging. This cuts down the backup time dramatically, in some cases even by up to half of the time it would take with the Full Catalog option.

Instant GRT is based on the principle that not all of the catalog information need be collected during a backup. When the required catalog information is needed at time of restore, it is generated on the fly while browsing granular items. So there are significant productivity benefits to be gained at the time of backup. All this comes with the same GRT experience of restoring from the Backup Exec UI as before!

This option is applicable for Microsoft Hyper-V and VMware data as well as remote agent-based backups of Microsoft Exchange, Microsoft SharePoint and Microsoft SQL. 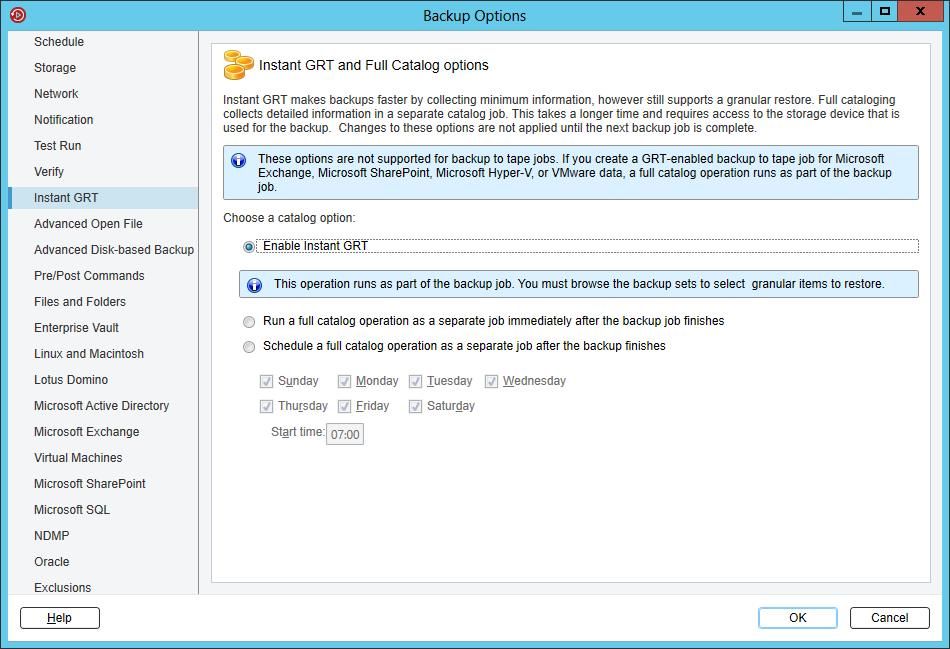 For more details about the instant GRT feature, refer to this article.