Cleaning up SQL versions on BUE 20.6

During an internal audit, it was noticed that there are several outdated versions of SQL Express installed on our BUE server, presumably these versions were installed during the various upgrades of the BUE program.  I'm wanting to see if I can safely delete these old versions that I think are no longer in use.  In Programs & Features, I have the following:

If I look under the Apps, I see the following "parent/child" programs listed:

When I launch the "SQL Server 2014 Configuration Manager", I do see the "BKUPEXEC" instance.  Looking at the advanced properties for the instance I see it listed as version 12.3.6024.0, which in MS speak is SQL 2014 SP3.  So, from all this, I gather that the current BUE database is running on SQL Server 2014 Express.  I'm assuming I can safely go back into Programs & Features and delete anything that isn't listed as SQL Server 2014, is that correct?

If you are on a Production environment I would recommend NOT uninstalling those cause when we try to uninstall we get the below message indicating there is a dependency and could cause issues as dependent products might not function as expected. 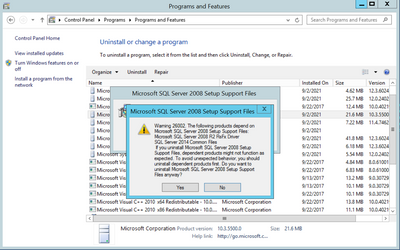