How to backup deduplication storage to external drive?

What is the proper procedure to make a backup of an entire deduplication storage directory to external storage?

In the backup job setup, there is both the raw directory structure of the drive letter and directory name "E:\BackupExecDeduplicationStorageFolder\" .... but there is an additional section under "Shadow copy components" with "Configuration" and "Storage" as possible selections. 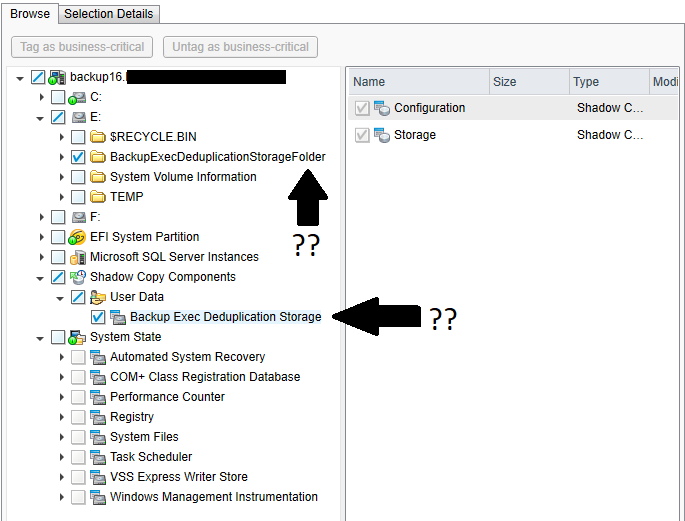 So which do I choose to backup? Both of these? Or only the shadow copy components?

The target of the backup is a large external USB drive, with backup compression enabled.

Also, is this really enough for the dedupe data to be usable if restored in the future, or do I need to be backing up some additional SQL database that is associated with the deduplication disk directory?

If you need to restore, then folder can be restored and reimported in BE. Also take a backup of BE data folder\bedb.bak and catalogs folder along with HKLM\software\symantec\Backup Exec for windows\PureDisk related keys

1) ensure jobs to dedupe are put on hold.no need to stop BE services
2) Backup the dedupe folder from shadow copy components to the disk storage.
3) you can backup the bedb.bak and catalog folder. This helps from restore perspective as you have all that you need to ensure you can restore easily from the dedupe storage once it is restored.

The above 2 methods will backup the deduped size only.

Just duplicate the sets from dedupe storage to another storage. But this way the actual (non deduped) size of the backup set will be duplicated on secondary storage.
0 Kudos
Reply

As a product feature request, the ability to back up and restore the dedup storage without having to go through all this complex manual preparation, should be directly available within the Backup Exec user interface.

The entire uncompressed dedupe storage is nearly equal in size to the compressed full tape backups I was previously doing of all of our servers, plus it contains data to recover everything going back four weeks.

It makes far more sense to be able to regularly and easily backup the entire dedupe storage, after all the other nightly full server backup jobs complete, rather than to export individual jobs out of it to external tape or cloud storage.

Follow any of the first two methods. You can recover dedupe those ways. I just mentioned about bedb.bak (take the data folder) and catalog folder so that once you import, you do not have to catalog the contents of the dedupe folder. If you back from shadow copy components then the dedupe related registry is also backed up.
0 Kudos
Reply

You can schedule the backup of dedupe from shadow copy component. I just mentioned to stop the jobs or ensure that no jobs are running because even though you have VSS that can take open file backup but I have seen that due to IO of backup to dedupe and IO generated when dedupe is backed up to external storage simulatenously the snapshot may get deleted (even dedupe generates IO due to its own processqueie tasks) which results in dedupe backup failure hence the recommendation. Hope all this info helps !
0 Kudos
Reply

I have similar feelings.  The dedup storage really needs a 1 button backup option.

Then a 1 button restore:

There should also be a sync option that simply sync's the entire storage to another device with very low priority.  Again, one button with maybe a few bandwidth control options.

I have actually abandoned backing up the dedup storage.  It was nothing but headaches.   Backups to the dedup storage would fail while it was being backed up.  Most of my sites have 30+ gb dedup volumes and It simply takes too long to backup all the dedup data.  If any minor network or storage conjestion occured, the backup of the dedup would would actually fail and ruin my day.  I can't imagine actually having to restore the data with the same headaches

A better approch for me was to consider the dedup storage as an "immediate" or temporary storage device where only the last few weeks of backup data exists in dedup.   Full backups are then duplicated to tape, disk or cloud.to maintain the GFS DR copies and the data in dedup expired.   This reduced the total size of dedup considerably and works much more reliably.

In addition to offloading weekly jobs offsite, I backup the BEkey, catalogs and data folders of Backup Exec.  Those two folders and the key combined with the offsite backups is everything needed to recover quickly.

Granted, offloading dedup data doesn't preserve the data deduplication but from an operators standpoint, I don't have to babysit the darn thing and can provide simple foolproof instructions any operator can follow.

I look at it like this.  Imagine a DR scenario where you've lost your site.  The dedup storage is backed up somewhere.  The process for restoral begins with reinstalling BE, then restoring the dedup data.  If the restore works lol...   On top of that, once the restore is complete, there is the catalog and index of the data which can take days depending on the size of dedup.  It's just not a viable solution for me.  I have to be able to recover a system within minutes, I can't have the process take a week.

Weekly offsite copies of full backups offer a simple and much quicker way to recover from a disaster than backing up dedup for me.