Hi Everybody,
Im having some problems regarding a large scale deployment using Veritas Backup Exec 21.
We have a 3 tiered architecture in our design with Central Administration server (CAS) at tier 1 (Head quarter), managed backup exec servers at tier 2 (city main-office), and city subsites at tier 3. All tiers have their own agents, and all offices are on different networks, but can communicate with each other.

Im currently testing the software in the LAB, and facing a lot of problems. I have different networks & VLANs in my LAB, and communication has been established flawlessly between machines. All firewalls have been turned off. The entire setup is running on different physical servers (Dell R720) with Win Server 2019 and some VMs on Hyper-V (also win 2019). All BackupExec servers are running on Hyper-V VMs.

At first, Managed BackupExec server was failing during installation while connecting with the CAS, but I fixed it by changing the SQL ports (via SQL configuration manager) on the CAS from 50147 to 1125 after many hours of troubleshooting. Now after completing installation, the services on the managed server fails to start no matter what I do with the error code: 3758129477.

I had no such problems and was able to deploy this setup flawlessly without messing with the SQL ports when I did it on a single server with VMware esxi virtual machines on the same network. Ive been stuck at it for days now, and just cant figure it out. Please suggest a fix as soon as possible. 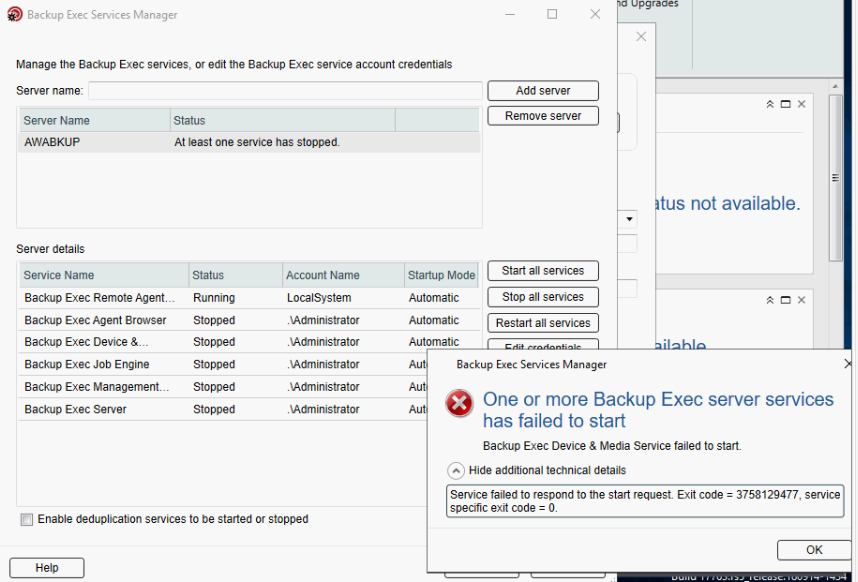 I hope that one of the experts will be along soon, but also a good idea to log an urgent Support call with Veritas.

So do more than one MBES server have this same error? Are there any additional details in the event logs?
Any other (but possibly related) errors in the application/system event log such as crashes etc

If the device & media service has a problem starting this would normally be a problem related to connecting to SQL.
Is the SQL Server (BKUPEXEC) service running OK on both the CAS and MBES servers?
Might be worth checking for any SQL related errors in the SQL logs mentioned here:
https://docs.microsoft.com/en-us/sql/database-engine/install-windows/view-and-read-sql-server-setup-...
Also check the the C:\Program Files\Veritas\Backup Exec\Logs\DBrecover.log
Are you able to do a successful UDL test as per https://www.veritas.com/support/en_US/article.100016039 ?

Did ther install appear to run successfully?
Any errors in the C:\ProgramData\Veritas\Backup Exec\Logs\BKUPINST21.HTM file?
Beyond that I would echo Marianne's comments - raise a support call.