Starting from Windows Server 2012, virtual machines in Hyper-V can be configured to use Server Message Block (SMB) 3.0 file shares as storage just like local volumes. By using SMB shares, storages for Hyper-V can be converged and operating costs can be reduced. Additional advantages of Scale-out file servers include continuously available file services, automatic load balancing and easy management of servers. Deploying Hyper-V over SMB shares from Scale-out file servers is an ideal solution for Hyper-V.

With Windows Server 2016, Microsoft also introduced Storage Spaces Direct which allows users to create highly available, highly scalable software-defined storage at a much lower cost than the traditional SAN or NAS arrays. Storage Spaces Direct provides for two deployment options – converged and hyper-converged. For hyper-converged architecture, there is a single cluster for compute as well as storage whereas with converged deployment, the storage and compute clusters are separate. In the latter case, the storage cluster is in the form of Scale-out file server based on SMB share.

Storage Spaces Direct can be used by all types of organizations, ranging from small businesses to large enterprises, as it is a very cost-effective deployment option.

In Windows Server 2016, Microsoft added Resilient Change Tracking (RCT) support to Hyper-V that enables a backup of virtual machines without the need for applications to explicitly use VSS on the Hyper-V host. Backup Exec 20.4 has leveraged RCT to enhance customer experience in protecting Hyper-V virtual machines in terms of costs, flexibility of storage configuration, performance and security. Backup Exec 20.4 provides a seamless and consistent user experience in protecting virtual machines irrespective of how the storage is configured: local volumes, SMB or Scale-out-file servers. With SMB 3.0 performance improvements, protecting virtual machines hosted over SMB is not expected see any drastic change in backup rates. And of course, with SMB encryption, your data over the wire remains secure.

For more details on Backup Exec 20.4 support for RCT, please refer to this blog.

Below is an example of permission settings on SMB shares. 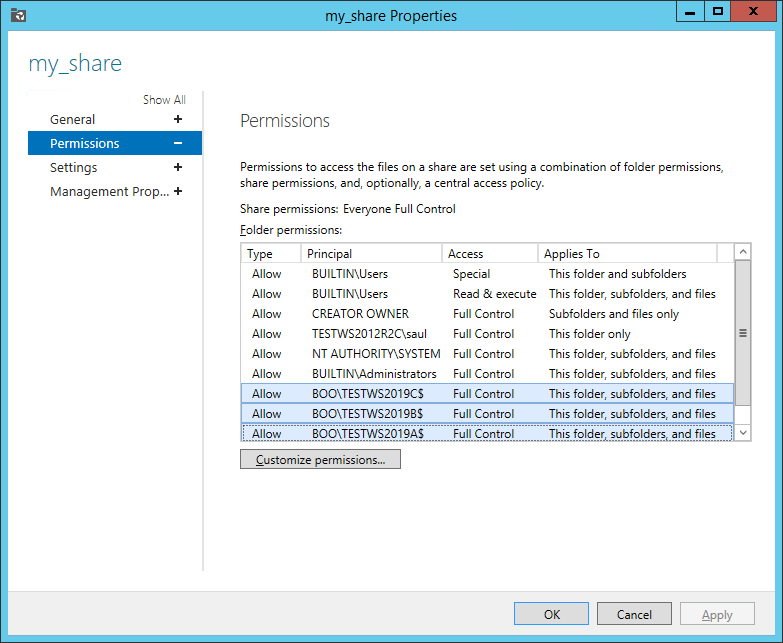 Backup Exec 20.4 is a wise choice for small and medium-sized business users, as Hyper-V virtual machines can be protected no matter where they are run, while allowing to benefit from highly available and scalable infrastructures like converged and hyper-converged storages in Storage Spaces Direct.