Tuning the Cloud Connectors in your environment

Network bandwidth has always been variable even in the enterprise network and at times the bandwidth shrinks more than expected. Since protection of workload targeted over to cloud storage device is a network intensive operation, naturally shrinking in network bandwidth may affect ongoing backup jobs.

With the introduction of Backup Exec 16 FP1, the Read/Write tuning options are available in the user interface. Whenever network bandwidth reduces, you can tune the Read/Write connections numbers easily. You are not required to restart the Backup Exec service.

By default, Backup Exec considers a standard network bandwidth speed to set the Read/Write connection numbers. The Read/Write tuning options work for both public and private cloud Storage devices that are supported by Backup Exec. 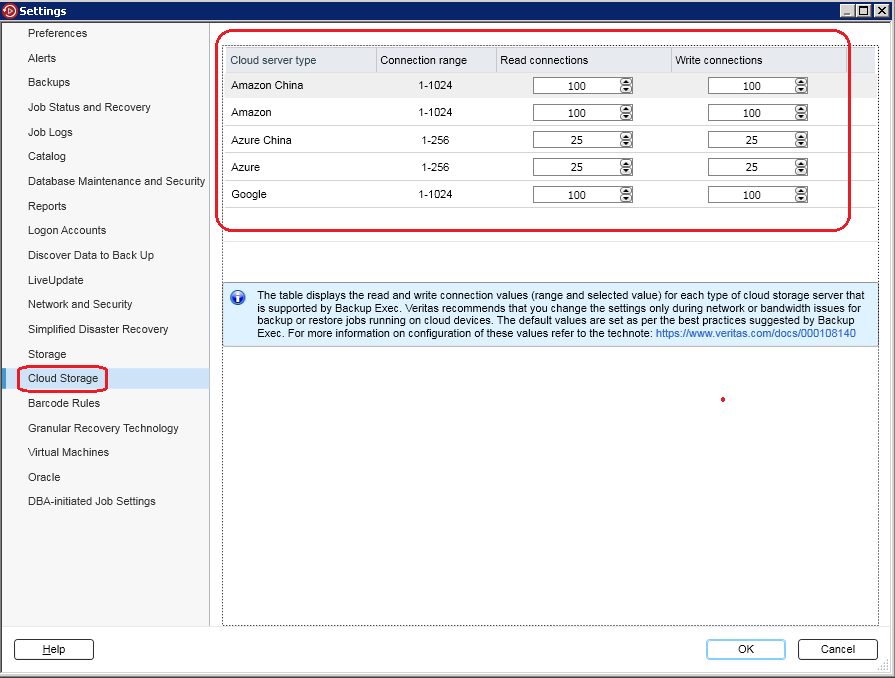 The following chart is based on an exercise performed over a high latency network that illustrates how the write connection numbers affect the cloud backup window.

*Throughput of the network when readings were taken-

When write connection numbers increase from 100 to 500, throughput increases from 504 MB/min to 675 MB/min.

However, when write connection numbers increase from 500 to 1000, the throughput increase is minimal.

Extra connections help as the next connection can send out a request, without waiting for the first reply to arrive. However, this only happens up to a point. Once you reach the optimum network capacity, any additional connection only adds to the overhead and does not add to the network speed (as observed in the scenario where the write connection numbers is increased from 500 to 1000).

Note that for low latency (excellent http bandwidth) networks, any change in the Read/Write numbers may not make a sizable difference in the backup window.