What you need to know to install Backup Exec 16

Backup Exec 16 has been rebranded with the new official Veritas theme and we are proud of it! The colors are fresh and vibrant with few changes to the install workflow beyond that. Take a look for yourself! 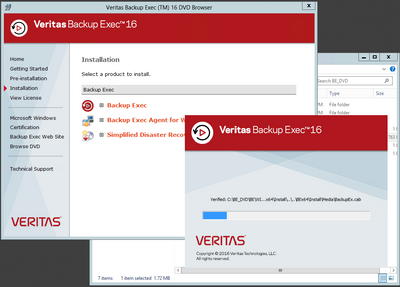 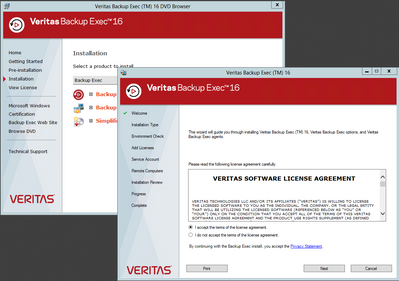 With the release of Backup Exec 16 we bring back the vibrant red that existed before Symantec when we were Veritas Software. Now we are Veritas Technologies and loving it!

With this Backup Exec 16 release, the installer has made a few subtle changes which we know you will be interested in. In no particular order, here are some of the important changes you might find interesting as you plan your upgrade!

Backup Exec 16 is internally called version 16. Some savvy partners and customers might say, hey! You skipped 15! We would say, How observant, Why Yes We Did! We wanted to avoid the confusion that some of our messages presented when we showed a string like “Backup Exec 15 version 14.2.1180.0”. It was confusing to see the external version say 15, but the internal version was 14.2. Since this was going to be a major release, we decided to sync up and jump to 16. Love us or hate us, it’s a done deal now! It should make for a good trivia question someday!

In addition, we purposely did not block the ability to install the agent on a Windows 2003 32/64 bit machine. However, be on notice that it’s not tested or supported any longer. We make no guarantees that it will work, or continue to work! The only reason was to help those customers continue to migrate off of it while they still can!

We will no longer install Windows Installer as part of our install. Previously if a system did not already have it installed, we would install MSI 4.5 on the system. We evaluated the supported platforms and determined that the systems we currently support should already have it present. If it is not installed, the installer will show a message requesting the user to install it before we can continue. This should not be an issue for the vast majority of our install base (if at all).

If you had V-Ray (tier A) or V-Ray (tier B) licenses before, you will now only have a V-Ray edition license! We have simplified the licensing and now only charge per socket. We believe this was the right choice for the customer and hope you agree!

That’s it! Those are the highlights of our install changes in the Backup Exec 16 installer. If you see something we missed or you have questions on any of these items, feel free to reply or reach out!