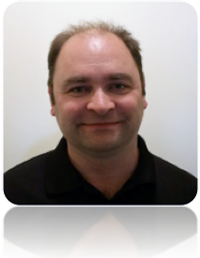 The laptops were specifically donated to the Youth Program to support the development of an application to teach the Dakelh language to students. Beyond the equipment donation, Critchley has also been donating his time and talent to the program, mentoring the students as they develop the app.

The program was started by Tessa, a First Nations woman in the community who wrote a letter to the federal government to ask for support to create an app for learning the Dakelh language, to help carry the language forward for future generations. She received funding to work on the project and it has ballooned into what it is today.

How did Veritas get involved?

“A friend of mine asked if I knew anyone who might want to volunteer to help mentor some students as they built an app,” says Critchley. He answered the call to volunteer.

So far, there are four student developers and three student designers working on building the app. In addition, there are media/arts students who are working on video, audio and image content. The laptops are a tremendous help for these students. Many of them live remotely and don’t have personal computers, so working on the project without the laptops was very difficult. Having a laptop to take home has made it easier for them to learn and be involved with the project. 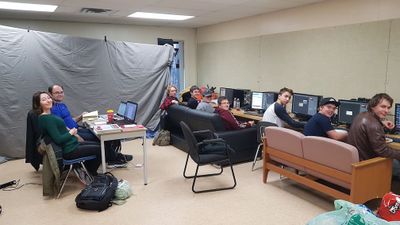 “The mentoring program is for the Senior Secondary School in Fort St James where there is a growing interest in the community and we are certainly encouraging those who have the drive and ambition to become a developer or web designer to join the program. My role has become much more than just mentoring some students to do app development. It also includes mentoring the design team on designing apps and providing leadership and decision making on the overarching Dakelh project,” explains Critchley.

The developers are being taught front-end development using Angular, Angular Material, TypeScript, HTML and CSS. The design team is learning Balsamiq to design the app, and Photoshop to create the content.

The two goals in the program

The first goal is to create an application to retain and teach the Dakelh language and culture. Dakelh is a dying language, as are many First Nations languages and there are relatively few people left who speak the language and they are aging. There were some who worked on similar projects in the past, but it is a very sensitive area for the people and much of that work wasn’t accepted. There are hurdles to overcome and the work, in the end, needs to be approved and accepted by the community. According to Critchley, they are doing things differently this time. “We have been working very closely with the Nak’azdli community to produce an application they will use and accept and it’s our hope that the application will be used in the various elementary and secondary schools’ curriculums to teach the Dakelh language to students. We’ve had several comments from the Nak’azdli community already, indicating that we are on the right track. One comment was given to us from a parent of one of the students who said, “This is what reconciliation looks like.’ There have been many mistakes made in the past towards the First Nations people, and developing a respectful and trusting relationship between themselves and Canada, reconciliation, is very important to them.”

The app design also reflects the cultural way of communicating and teaching the language. It is a written language today, but it hasn’t always been.

The second goal of the program is to mentor students in design/development. Critchley is hoping this mentoring program continues to provide training for students in the community, giving them opportunities to pursue development/design careers.

There are many who are involved in the project — development and design students, media students, and other teams working to create video/audio recordings. The media students mainly work with their teacher at the school on that part of the project. There are several other components of this team: The leader and team at OneSparc (a small consulting company that has been instrumental in getting the majority of funding together for the project, coordinating and helping it get off the ground), First Nations language speakers, First Nations Elders, a media/arts teacher from the Fort St James Secondary School), a Language Research team member who majored in linguistics, Tessa — the program’s originator, and many others.

This is going to be an ongoing project for many years. The application alone will continue to be updated with more content and features as it is created. Creating the content itself is a huge undertaking, for each word/phrase will need the appropriate English translation/interpretation, audio recordings of the pronunciation, graphics created to illustrate the word/phrase, its use and video content also illustrating the use of the word/phrase. There are many teams coordinating to produce this content. Thanks to Critchley’s and the team’s work, the application will eventually have lessons, games, videos, electronic books, dictionary, and access to various resources to help teach and retain the language. Critchley estimates that If the team were to get 100 words/phrases completed per week, it would take about 10 years to complete the project.

With this work, Critchley exemplifies the power of Veritas employees sharing their talents and giving back to their communities. #LifeAtVeritas