Has Your Data Gone Rogue?

I’ll apologize in advance but it was inevitable that we would go here. We launched a brand new interactive web experience called Data’s Dark Side and the Star Wars dynasty is releasing the brand new movie, Rogue One, A Star Wars Story.  It would have been outright disrespectful and so un-Silicon Valley of us to ignore the most overused metaphorical marketing of a technology and movie relationship in history. It’s just so easy. 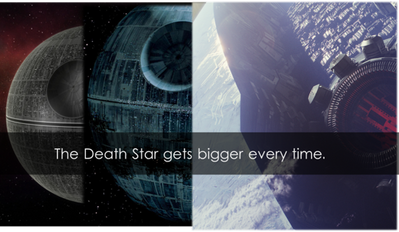 So as we anxiously await the opening of Rogue One I will take this opportunity to push terrible technology-Star Wars metaphors to new depths.

I love the drama of a planet destroying, planet sized, or in the case of The Forces Awakens, planet converted weapon. I also love the audacity of just rinsing and repeating the same storyline. With one major adjustment – the original 120km wide Deathstar grew to the 160km wide Deathstar II and then to the 660 km wide Starkiller Base (Measured diameters courtesy of Wookiepedia).  Bigger is indeed ‘badder’. In our unstructured data world bigger can also be badder, or at least incredibly expensive to the Empire’s coffers. With data growing 39% year over year companies are struggling with the exponential increase in the associated storage and management costs. 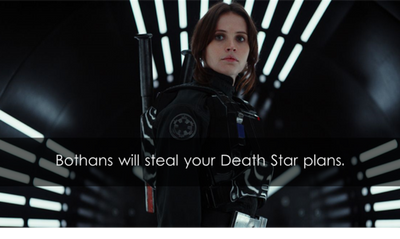 If the empire could just protect its core IP! The premise of the Rogue One offshoot is we are getting the background story behind a line from one of the original Star Wars movies. A line that was used in reference to the schematics of the Deathstar that led the rebel alliance to eventually destroy it: “Many Bothans died to bring us this information.”  In a time of conflict, a group of unlikely heroes (we can assume some Bothans) band together on a mission to steal the plans to the Death Star.

Most wouldn’t refer to the threats to your enterprise information as a ‘band of unlikely heros’, nor would the future of the universe hang on that information. However you face external threats to your data on a daily basis.  Vendors in and out, contractor employees gaining access to internal systems, shared document links over proliferating – just so many areas that are potentially exposed. 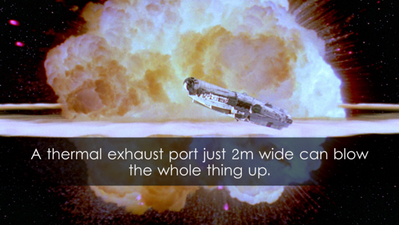 Luke Skywalker was only able to hit the tiny thermal exhaust port that destroyed the Deathstar because he practiced “bull's-eye(ing) womp rats in (his) T-16 back home.”  Such a small and unlikely vulnerability took down the entire Deathstar.  We’re witnessing many situations where small issues can have huge, costly and damaging results.  My favorite data breach example is Target’s 2013 blunder where, after insurance payments and tax write-offs, the tangible, monetary impact to target was a little over $100 million or 0.1% of sales. But their reputation was destroyed, a reputational lead they had always enjoyed over Amazon and Wal-Mart. 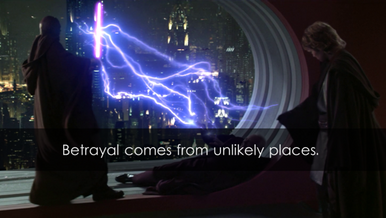 Not my favorite scene but I suppose the Emperor’s weird face from the original series had to originate somewhere.  Anakin struggling with his inner monologue, needing to save Padme but knowing it wasn’t the Jedi way, turns on Mace Windu shortly after alerting him of the fact the Chancellor was a Sith Lord.  What betrayal!

It’s difficult to predict your employee’s mental state of mind or motivation, but most of them are not malicious. However many of them are negligent. We have a tendency to store a significant amount of information that is potentially damaging to the companies we work for – like unencrypted company secrets, unencrypted personal records or incriminating employee correspondence – because we’re data hoarders. 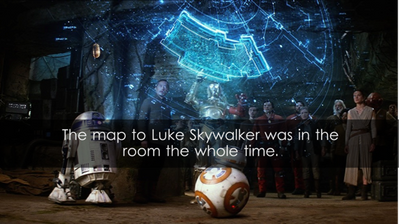 In the Force Awakens, Ren, Han Solo, BB-8 all arrive at the rebel hideout prior to the real battle starting. R2-D2 sits in the corner in low power mode and little does anyone know he happens to have the missing piece of the map needed to find Luke Skywalker. If they had only tagged and made their data discoverable, Han Solo could be alive and Harrison Ford might have a job in 2017 for the next movie in the series.

The average enterprise has around 10PB of data in total.  Based on our findings in the Data Genomics Index, the average PB holds about 2.3 billion files. That is 23 billion files, 11.9 billion of which are likely dark and you know nothing about. Could you find the map to Luke Skywalker hiding in your Databerg?

I hope you, like me, can’t wait for Rogue One to release this weekend.  And I hope you check out Data’s Dark Side to see what various forces of the dark side might be hidden in your environement.