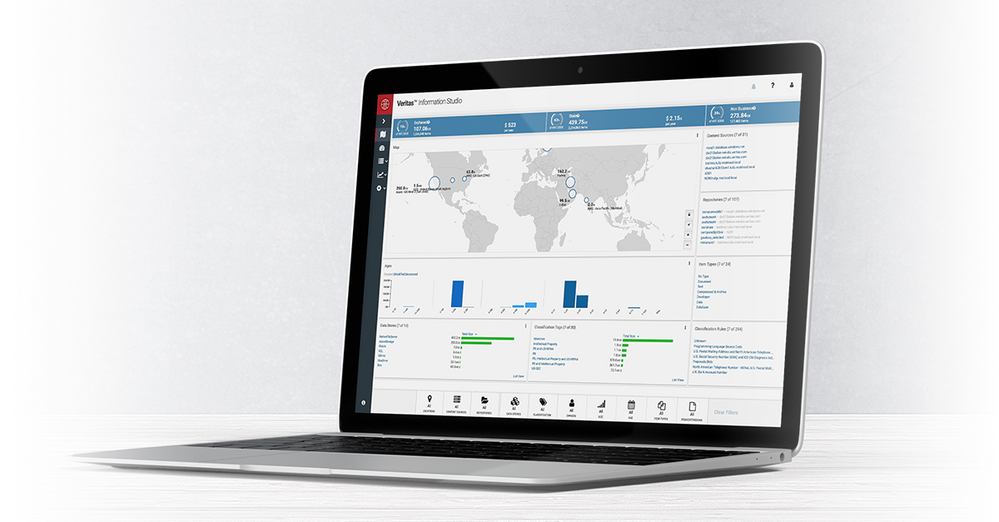 With Information Studio, Veritas provides IT professionals a tool to easily identify specific details about data and the information it contains, pinpointing areas of risk, waste, and potential value. 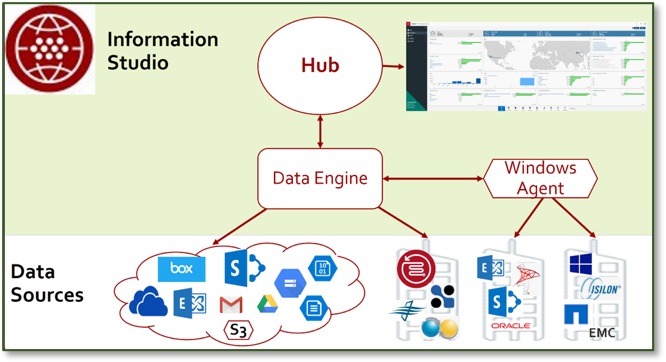 Let’s get technical: how does it work?

Data sources are connected
To begin, an authorized user provides credentials and connection details for the data sources; this information is stored securely in the Hub. Information Studio includes connectors to a number of data sources, and some of these connectors run natively in the data engine while others are installed as an agent run in a Windows VM.

Data is scanned and metadata is collected
A scan policy containing a schedule is created for a data source. The scheduler on the Hub sends the appropriate data engine a request to start a scan on the data source. The data engine connected to the data source captures metadata, such as create, access, and modification time, as well as file path. It also captures user defined tags from O365 data sources. It performs a differential operation which ignores unchanged data and normalizes the format into a standard JSON format, pushing this information to the Hub. The Hub indexes this information and stores it in its database.

Running classification
Information Studio can find other important information such as which data has regulatory requirements or contains personally identifiable information (PII). To simplify this, Information Studio comes with more than 700 preconfigured data classification patterns and more than 110 policies to identify common data privacy and regulatory compliance principles. Veritas regularly adds to and updates these patterns and policies to support new and changing compliance regulations.Below are some examples of these preconfigured policies grouped by regulation type:

U.S. Federal Regulations: California Assembly Bill 1298 (HIPPA), California Financial Information Privacy Act (SB1) and Massachusetts regulation 201 CMR 17.00 (MA 201 CMR 17).In the event it’s important to identify files with other specific pattern matches, custom policies can be created. Custom policies can contain any number of conditions. Conditions can look for multiple words, phrases or regular expressions, keywords and lexicons and use wildcards and NEAR and BEFORE operators to include proximity.

Within the Information Studio UI an authorized user can select which classification policies are relevant to them and thus they want enabled and on what data sources.

A classification policy containing a schedule is created for a data source. The asset service on the Hub queries the indexed data to create a list of files that haven’t been classified since the last modification time. It also filters it for inclusion and exclusion rules contained within the policy.  The filtered output list of items is sent from the Hub to the appropriate data engine along with a request to start classification on those specific items.

The data engine reads the items from the data source and temporarily stores a local copy. The data engine’s classifier will read the text from these files and looks for matches to the conditions within the classification policies that are enabled. Each match it finds adds a classifier tag that Information Studio associates with the file. This tag is sent to the hub where it is stored in a database and indexed. After classification is complete the file will be deleted from the data engine’s local storage.

Note: Classification can be run on data within Microsoft SharePoint on-premise, Office 365 OneDrive or a CIFS share. These CIFS shares can be hosted anywhere, and examples of supported CIFS shares include Windows file servers, NetApp filers, EMC Celerra, VNX and Isilon.

Generating reports
Information Studio displays the information it captures about data in your infrastructure in the UI.  The information can be seen in a series of graphs which allow users to easily see where their data exists in a map view, and also groups similar data.

These filtered reports can be used to perform informed actions.  As an example, it can be filtered for all files containing PII that are more than 2 years old contained within the EU.  With this list of items an authorized user can defensibly delete these files thus reducing risk and increasing storage efficiency within their infrastructure.

The reports also identify orphaned, stale and non-business data and each of their associated costs.

Once identified this data can be managed appropriately, such as defensibly deleted or stored on lower cost archive storage. 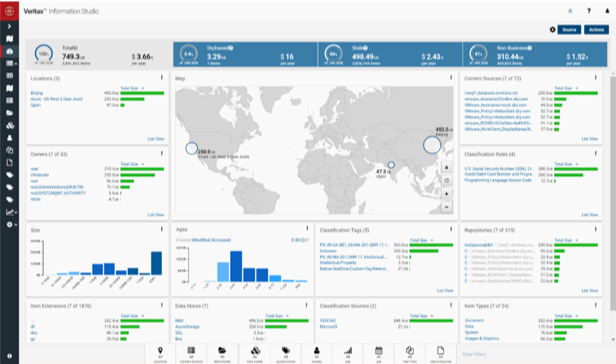 Information Studio architecture
Information Studio runs as a virtual appliance in a VMware ESX server. Its software runs in Docker containers that are managed by Kubernetes, and contains two major components, the hub and the data engine.

The hub is responsible for management via UI, maintaining configuration details, managing jobs, storing data, logging and reporting. Information Studio uses various Infrastructure Foundation Services to store and manage data on the platform. These services provide the ability to visualize the information gathered about the data in your infrastructure. 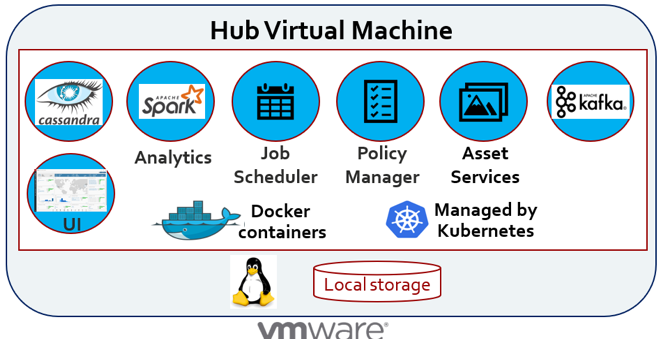 Logical representation of the virtual machine running the Hub

The data engine is responsible for connecting with data sources, topology discovery, metadata collection, classification and sending data to the hub. The data engine contains connectors for many data sources, however on-premises versions of Microsoft SharePoint, Exchange, SQL, Oracle and CIFS shares require an agent be installed on a separate Windows VM that resides within the same local network as the data source. 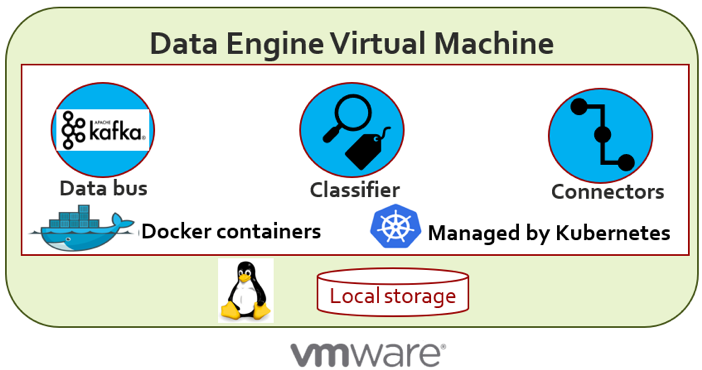 Logical representation of a virtual machine running the data engine

Information Studio is deployed as a single OVA containing both the hub and data engine roles. The minimum configuration is one virtual machine that runs both the Hub and Data Engine. However, in a typical configuration there will be one Hub and one or more data engines. Since there is a lot of data transferred between a data source and its data engine, it is recommended to ensure they are located where there is good network bandwidth between them. Having one Hub provides centralized management and control. Having multiple data engines optimizes WAN bandwidth.

Please join me at veritas.com/infostudio for additional details.