Sign In
Turn on suggestions
Auto-suggest helps you quickly narrow down your search results by suggesting possible matches as you type.
Showing results for
Search instead for
Did you mean:
Article Options
A Fresh Start Isn’t Much Fun in Data Protection
PMayer
Employee

Most data protection administrators who I’ve talked with over the years have a story that goes something like this: “I was 99% complete with my longest-running backup job when all of the sudden, WHAM!” Something bad happened, like a network hiccup, target storage filled up, source data host went offline temporarily or whatever. Often the interruption lasts for just a moment but depending on the approach used, it can often require the backup job to start over from the beginning! The ramifications of this disruption can be significant, including data loss, performance impact to production users and time spent by the IT team to troubleshoot the situation.

When protecting large network-attached storage (NAS) platforms, this situation can be particularly troubling because the density of data on a typical NAS share/volume has grown to be a significant data source, often reaching hundreds of terabytes.

In NetBackup 8.3, we introduced a new feature called Dynamic NAS (DNAS), which has dynamic multi-streaming to speed up backup times and stores data in a portable format that allows it to be restored anywhere, including the cloud. Users of the new feature have enjoyed the new flexibility provided by DNAS, but several users have indicated they cannot afford to restart a backup from scratch if the backup fails during the process.

To address this requirement, NetBackup 9 has added a Checkpoint Restart capability to the DNAS feature, enabling backup operations to automatically resume where they left off at the time of failure. 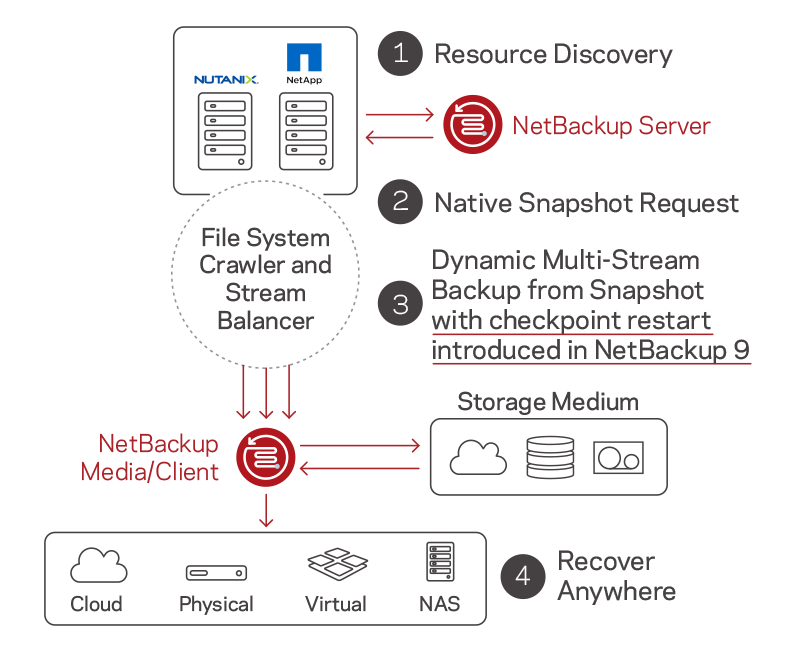 The Checkpoint Restart feature is based on the same capability that exists in the standard NetBackup client and works like this:

In the case of a failed backup, it is important to understand you have both options available—restart and resume. Restart will start the backup from the beginning, whereas resume starts from last known checkpoint. Using a snapshot at the beginning of the backup process will ensure data remains static during the downtime and restart activity.

Checkpoint Restart serves as a great extension to NetBackup’s DNAS capability, allowing you to keep your data protected without missing backup windows due to unplanned or planned interruptions. Hopefully, you can take advantage of these new innovations to provide a better level of protection to your critical NAS resources.

Ready to upgrade or renew NetBackup? Contact your preferred Veritas Channel Partner or Veritas Account Manager today to discuss your options. If you're unsure who to contact, email our Customer Care team or request a call from our Sales Team.

To learn more about the exciting new features in NetBackup 9, check out:

I am not sure I have seen DNAS compatibility with PowerScale stated anywhere. If it's me who didn't see it, my bad then. I'd find it very interesting to see DNAS (and not only Snapshot Manager) being compatible with PowerScale, to take advantage of this Checkpoint Restart capability.