Sign In
Turn on suggestions
Auto-suggest helps you quickly narrow down your search results by suggesting possible matches as you type.
Showing results for
Search instead for
Did you mean:
Article Options
100 Days of Backup Exec
GarethHansford
Employee

100 days of leading the Backup Exec Sales team has gone quickly.  In that time I literally went round the world and met over 30 of our channel partners, presented to over 150 of them and met about 90% of my BE Sales Team - now known as the BEST!

I wanted to share what I’ve heard, learnt and have planned for Backup Exec.

The overwhelming and most pleasing element is that everyone I meet loves our product both customers and partners!  In our messaging for Backup Exec we reference Trusted as one of the key attributes (alongside Flexible and Powerful) and that was certainly borne out by the feedback I received.  The passion I witnessed from our technical partner community through to our largest resellers is amazing, so it’s humbling to become part of that community and continue to drive Backup Exec forward.

I also found a positive anticipation of our upcoming announcement of Backup Exec v16 and Veritas System Recovery v16 – this strengthens both our cloud and virtual capabilities with a direct connection to Microsoft Azure and support for the latest versions of VMWare, Hyper-V and also Windows 2016 Server – in fact we had the new version available for shipment to our existing customers just 2 days after Microsoft’s (early) release announcement – great support from our development team and invaluable for our customers. 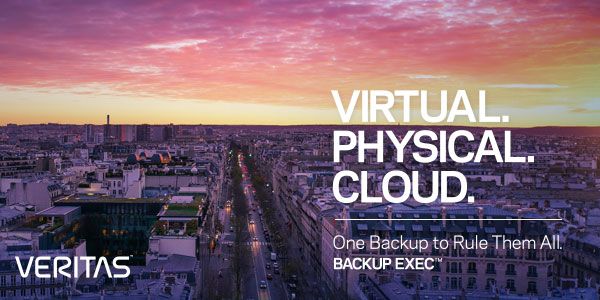 The feedback we received from a Spiceworks survey confirmed the acceleration of data being moved to the cloud, especially for backup and recovery, hence the importance we’ve placed on having a strong capability across Physical, Virtual and Cloud environments and being able to move seamlessly between them within one clear and simple product.  That Trust we have gained from our 20 years of experience is allied to the Flexibility we provide across all three environments and the powerful performance we offer with optimised functionality such as data deduplication and instant VM recovery.

We have much more to look forward to with Backup Exec – we’ve already laid out our roadmap for the following three quarters, which brings further enhancements and performance improvements to Backup Exec. Over the next few months I’m looking forward to meeting more of our partners and launching Backup Exec v16 globally during November.