Sign In
Turn on suggestions
Auto-suggest helps you quickly narrow down your search results by suggesting possible matches as you type.
Showing results for
Search instead for
Did you mean:
Article Options
Backup Exec: to the Cloud and beyond!
GarethHansford
Employee

In early November we launched Backup Exec v16 with a strong focus on our new direct connection capability to Microsoft Azure. This feature clears the path to low cloud storage costs and streamlines data backup operations. Backup Exec 16 makes it simple to select Azure as a target for backups and update offline storage policies, often replacing tape drives in the process. 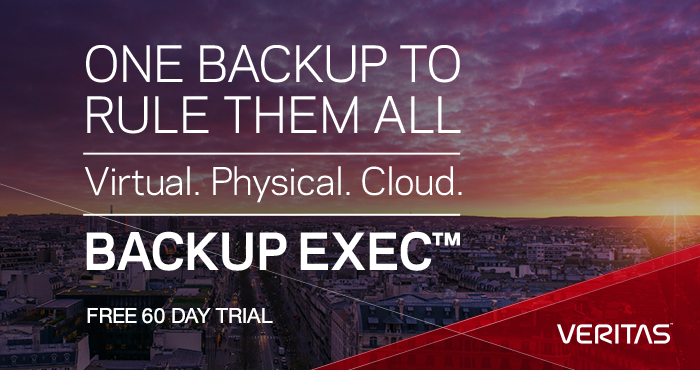 Veritas’ 20-plus year relationship with Microsoft delivers an advantage based on the synergy and trust between our organisations.  Our strategic partnership enhances integration of our products which results in better and faster delivery of benefit to our end-user customers. A great example of this is our release of Windows Server 2016 support in Backup Exec just two days after the (early) announcement of Windows 2016 by Microsoft.  That allows our customers to test and deploy the new environment sooner to take advantage of the new technology available without delay.

I’ve presented the news and details of our Backup Exec v16 announcement in meetings with our channel Partners and teams around the world over the last few weeks and it’s clear that there is far more to this message than the technical capabilities of the connection to Azure.  We knew from the Spiceworks report that the move of data to the cloud was accelerating, then in a recent Canalys candefero poll it was revealed that only 6% of resellers declared they are NOT selling cloud services as part of their offerings. In short: this is the future, right here, right now!  We’ve passed the tipping point with cloud usage being the norm for our customers, and what’s more backup is the #1 use case for cloud. But what does that really mean for a data management strategy?

The integration of Cloud into a data centre strategy alongside the physical and virtual environments mean that it’s even more important now to have a single comprehensive tool and skillset to provide equal capability in and across all three environments. Regardless of where the customer is in their transition to a hybrid cloud setup, having to switch between products or change practices with cloud workloads is only going to add complexity. Backup Exec’s virtual, physical and Azure capabilities, combined with support for Amazon Web Services S3 and Google Cloud Storage, lead us to believe Backup Exec is the best SMB data management product to support customers on this journey.

Backup Exec makes the integration of the cloud world simpler by seamlessly continuing to use the same product and skills that cover the physical and virtual data today, and extending into cloud as a backup target or even backing up workloads running in the cloud to cloud storage or back to the data centre.  With the flexibility that Backup Exec offers, there are no compromises required in the complete data management of the modern hybrid data centre environment.

I’ve been very encouraged by the positive feedback from partners and our team when we’ve discussed Backup Exec with the Cloud, and I’m excited that we will be prioritising further enhancements for cloud in the roadmap over the next couple of feature pack updates.

Cloud is definitely the future for data management and Backup Exec is well placed to take the leadership role in versatile SMB backup and recovery. Why not take a FREE trial of Backup Exec today?