Had to re-install BE 2015. Downloaded from website yesterday and found the tape we need by cataloging the tapes in the drive. When we go to restore (DESPERATELY) the needed info, we get the below error. 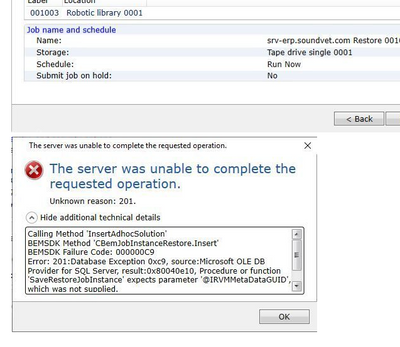 Can I check what data you are trying to restore.

Also you downloaded BE 15 from the site, but at what level, as there are 4 different installation packages there, but Feature Pack 5 was the last major release ? There were 5 Hotfixes released after that, that would ideally need to be applied on top of FP5 if that is the version being used? It depends whether you have any Lotus Notes data that needs to be protected, as Notes support was removed during the BE 15 release.

No lotus notes.Just BAK sql server backup files at this time. I downloaded Backup_Exec_15_14.2_FP3_MultiPlatforms_Multilingual.zip. I haven't applied all the hot fixes.

If little has been done so far, it may be better to uninstall BE 15 completely and rename any remaiing Catalogs folder. I would then recommend downloadng and retrying with the Backup_Exec_15_14.2_FP5_MultiPlatforms_Multilingual.zip  and then apply the Hotfixes (under Updates), to see if this is seen better. I found a similar 'InsertAdhocSolution' error in an old case, that appears was resolved by upgrading to the FP5 release.

Dont have that kind of time. Took 3 hours to uninstall 10 and install 15. Took 16 hours to catalog 10 tapes. We just now need to restore. We had the hardware ready on Saturday. It’s Wednesday and we are still trying to get the data. Last hot fix is running now.
0 Kudos
Reply