Sign In
Turn on suggestions
Auto-suggest helps you quickly narrow down your search results by suggesting possible matches as you type.
Showing results for
Search instead for
Did you mean:
Article Options
Accelerated Virtual Machine Backups
PrashantPatil
Employee

Datacenter’s size is growing rapidly, and vSphere data centers are no exception. It is very essential for backup solutions to protect the precise and accurate data from the source. When it comes to backup performance, Backup Exec uses VMWare CBT (Change Block Tracking) to greatly improve the speed of incremental backups by only backing up the modified blocks rather than walking the while disk. 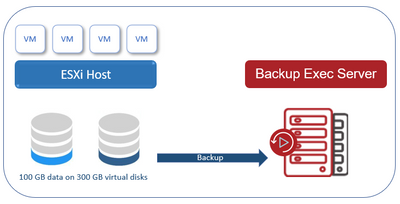 Taking this one step ahead, Backup Exec 21.3 further refines CBT by only backing up the blocks that are allocated or in use. This would see a significant improvement in backup job performance for Full and Incremental backup especially when the virtual disk size is larger but having less data on the disk. This potentially helps to meet the backup window target, etc. Our internal testing has shown double-digit performance improvement compared to previous Backup Exec releases.

VMFS (Virtual Machine File System) can run the unmap command to release free storage space in the background on thin-provisioned storage arrays that support unmap operations, and such unmapped blocks on virtual disks are recorded as changed blocks by CBT. Hence those unmapped blocks were getting backed up earlier. With Backup Exec 21.3, only the changed and allocated blocks are backed up and unmapped blocks are skipped during an incremental backup.

These changes in Backup Exec 21.3 represent our continued commitment to quickly bring incremental improvements to features that we release based on feedback from our customers.

You can try Backup Exec during a 60-day free trial here: https://www.veritas.com/form/trialware/backup-exec.

For more information, please refer to our Backup Exec website or administrator’s guide.