Are you a Data Hoarder?

The Data Genomics Index was the first time the industry got a peek behind the data storage curtain and finally received an answer to the question –what is my environment made of? It has been interesting to watch data managers react as we take this research on the road. Some in disbelief that data goes so unused, some surprised it wasn’t staler. Many of them planning immediate action to try and remediate their situation, while a few just accepting that data will accumulate regardless of effort. And whether you were surprised or nonchalant about the metrics, everyone made attempts to guess what their own company’s composition would be.

After all of the customer, media and analyst conversations, I believe the Data Genomics Index left the industry with one overarching realization—the average company’s storage environment is unhealthy—stale, orphaned, disproportionate, risky and at the very least, inordinately expensive. We know from our customers that they want to change that unhealthiness, but they are struggling with two seemingly competing forces of nature in combating it – the exponential data growth curve and the restriction of resources and budget to fight it with new servers and applications.

To really help our customers fight this crippling growth dynamic we needed to take a look at the user behavior that created that unhealthy situation illuminated in the Data Genomics Index. It’s important to remember we are dealing with user created data –unstructured data—and solutions for user created data inevitably need to engage users to be successful. So we decided to take a hard look at the people and behavior aspects that may be affecting the storage environment. 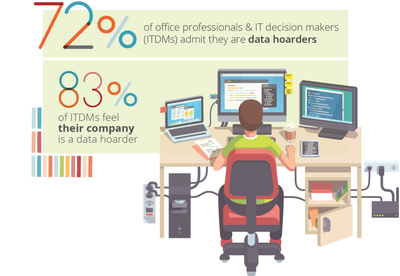 The Data Hoarder Report (also available in French and German) is based on a survey of over 10,000 IT decision makers and office professionals throughout the globe that questioned their data storage habits. In my opinion, this report reveals insights into digital behaviors that are critical to data management, scary in the context of data risk and strange as we examine our behaviors toward digital possessions vs tangible ones. The findings also set up three dichotomies that are compelling for further exploration.

Let’s start with the implications for data managers. They face a user behavior problem that is pervasive, with 72% of the respondents to the survey self-selecting themselves as digital hoarders. Many of the data management professionals that we work with struggle with the infrastructure demands and cloud adoption that is being forced by a 39% year-over-year, data growth rate. It is easy to narrow their focus to pure technology and hardware solutions, but it’s clear that in order to address information management challenges companies face not only a data challenge but a user challenge.

There is obviously a direct relationship between digital hoarding and the costs associated with data management. More data means more disks which mean more dollars. We know a significant portion of the environment is wasted on inactive data[1] and this report only doubles down on that aspect, with respondents self-identifying 33% their data as delete-able without apparent consequence. While costs are of concern to every IT department, it is the risk associated with a hoarding culture that is truly dangerous to an organization. Eighty three percent of IT decision makers and 62% of office professionals admitted they retained items that could be detrimental to their employer or their own career prospects. These include: unencrypted personnel records, job applications to other companies, unencrypted company secrets, embarrassing employee correspondence and sexually explicit material. And they hoarded these across company and personal devices…

If a hoarding culture like the research alludes to is allowed to persist, it will significantly damage an organization’s response capability and compliance posture in regards to increasingly more stringent regulatory paradigms like the GDPR. Nor is the current climate on data breaches sympathetic to these kinds of storage habits. We saw IT decision makers make the direct correlation between information management and security when they indicated that hoarding data increases the data breach response time. 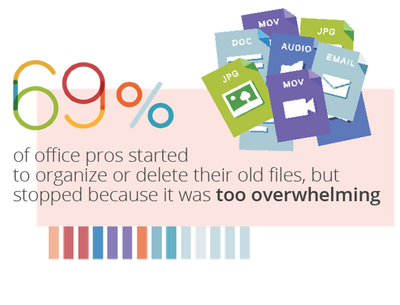 Now I think the risks presented in the research are no secret, but the respondents recognition of the risky behavior brings me to my second polarizing subject—motivation. We’ve identified an overwhelmingly positive recognition of the problem—with 72% of the respondents admitting to hoarding and 73% admitting to hoarding dangerous items—yet there is incredibly low motivation to change it. The research found 69% started and stopped a project to clean up their digital libraries because it was too overwhelming. With data growth giving no indication of slowing it will be interesting to track which side will give in. 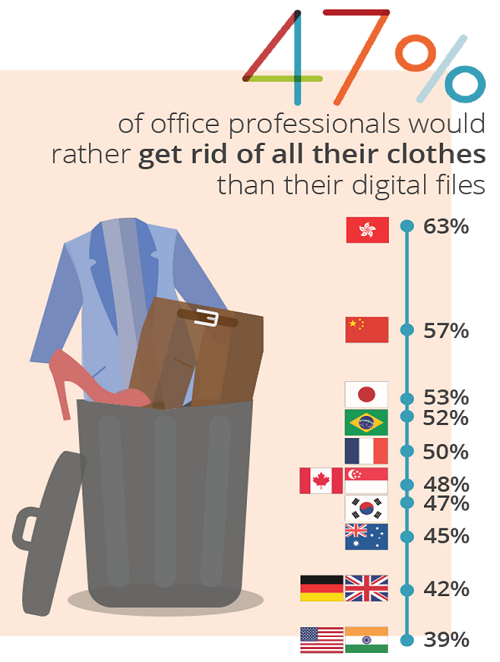 Finally, let’s address what could be called a peculiar relationship with our data. Respondents to the survey are willing to do the unexpected in order to keep the files they’ve hoarded, giving up their clothes and weekends rather than deleting their files. As we saw in the above stats, the attachment to digital files even extends to that data which one would assume would have very significant negative impact to the owner. The world is experiencing an accelerating digital transformation where data holds an increasingly significant financial, health and social role in our lives. However I would not have expected multiple countries to have over 50% of the participants choose their data over their wardrobe.

This personal angle sets up an interesting spectrum of acceptance of the digital transformation. On one side of the x axis we have what people are willing to store on corporate devices knowing the potential negative impact—the extreme being sexually explicit and incriminating material. And on the other side we have a spectrum of what they would rather give up than their data, the extreme having probably not been tested yet, but an argument could be made for clothes. We’ve been presenting this spectrum to various groups and customers and how far someone is willing to go in either direction seems to be a personal preference. Perhaps the relationship with data and the perception of its relative value is also personal. Again, it is a thread to explore further.

So, this digital hoarding behavior appears to be widespread (72% self-select themselves at hoarders), it is recognized as potentially unsavory or damaging (60% don’t want a hoarder as a manager), it exposes organizations to serious information risk (83% think it lengthens the time to respond to a data breach), yet no one seems to have the motivation to change it (69% have abandoned change effort). What do organizations do?

Based purely on the data captured in the survey one might think that we have a screw loose when it comes to how we are valuing the data we increasingly create and store on a daily basis, and corporations could benefit from a data-psych staff. This research left us with a lot of questions about how psychologically we are attributing value and ownership to digital assets based on our role as knowledge worker or information steward. We are excited to explore this in further research, so stay tuned.

But there are real steps that organizations can take to identify and start to change a data hoarding culture. The first step is accepting that increased infrastructure capacity will not cure data growth challenges if user behavior is the root cause. Development and over communication of organizational policies that promote the efficient use of storage within policy requirements will help educate employees about the need for digital behavior change. The motivation issue does suggest that technology is going to have to be the enabler, so make sure that you have the visibility into your data to justify deletion and clean-up decisions and the automated policies to continue to enforce it.