In-Memory OLTP is supported with SQL Server 2014 onwards and mainly features two new data structures which are Memory-Optimized Tables and Natively Compiled Stored Procedures. They are integrated into SQL Server’s Database Engine and can be used in the same manner as their traditional counterparts, allowing applications to leverage new performance benefits with minimal changes to the database and the application.

However, since the underlying storage format is different (data held in RAM is also persisted on localized disk) it calls for backup applications to protect the In-Memory database to offer consistent backup and recovery functionality.

Rest assured, starting in Backup Exec 21.2, we now support In-Memory-Optimized databases for backup and recovery.  They are backed up like any other traditional tables such as log backups and can be restored in various ways. Additionally, Backup Exec also supports memory-optimized filegroups and relative file stream data present on disk to ensure the restore can reconcile checkpoints without any loss of data.

Memory-optimized tables are backed up as part of regular database backups. They will be visible to browse, select for backups, and can be identified by an ‘InMemory’ attribute as shown in the figure below. 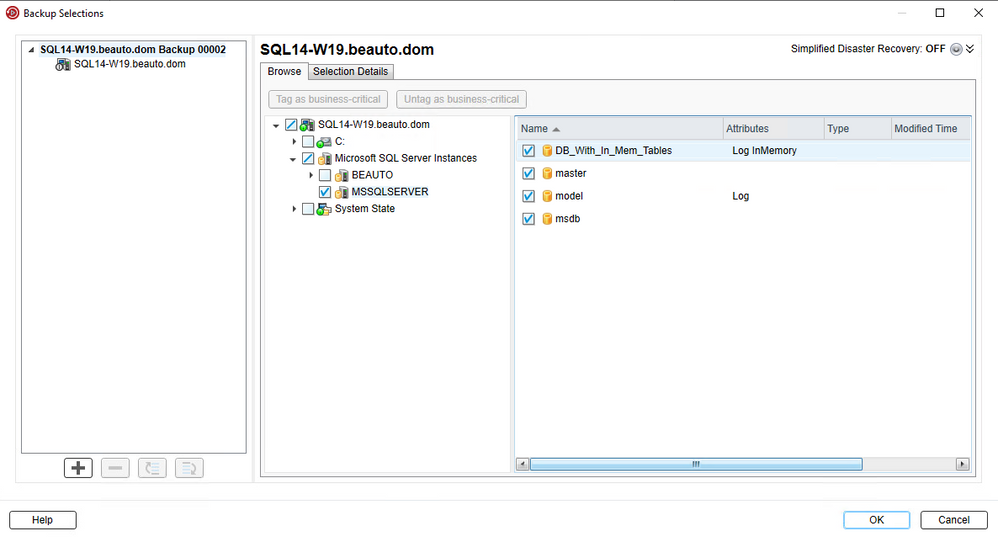 So apart from executing the regular SQL DATABASE BACKUP commands and creating the checkpoint backing up the database streams, Backup Exec also protects the File Group container by backing up the on-disk file stream data.

Backup Exec supports all restore scenarios including redirected restores to match that of the normal databases. Given that Backup Exec provides multiple restore options, we’ve created the following comparison table for reference.

Memory-optimized databases frequently have substantial memory requirements, and you should consider those requirements when planning for backup and recovery. Although the actual memory needed for the database often depends on the application which relies on said database, a ballpark figure would be roughly two times the size of the database tables. Keeping that figure in mind, make sure that you have extra memory available for processing restore activity.

These types of improvements come from our continued commitment to quickly add to new features based on feedback from our customers.

If you are not a current Backup Exec customer, we invite you to learn more about the solution at the following link: www.backupexec.com