The Veritas Flex Appliance and the Game of Leapfrog

I include server virtualization and containerization in the “not new” category with both actually being quite old in terms of invention, but in more recent history, containers having more interesting applications. The reason I’m going down this path is I frequently get questions regarding the Flex appliance as to why we chose to implement with a containerized architecture instead of using a hypervisor for an HCI data protection appliance like [insert company name here]? And, are your sure there’s no hypervisor? Yes, I’m sure there’s no hypervisor in Flex, it uses containers. Fundamentally there are good applications for both, and for entirely different types of workloads, so let’s look at why chose containers for the Flex Appliance instead of a hypervisor.

Containers has its roots in FreeBSD “jails”. Jails enabled FreeBSD clusters to be hardened and for deploying of “microservices” (to use a more modern turn of phrase) onto the systems.

The big advantage here being very high levels of isolation for the microservices, each running in its own jail. Containers then versus now are fairly different.  FreeBSD jails were relatively primitive compared to something like Docker, but for their time they were state of the art, and they worked quite well.

Which brings us to hypervisors. VMware started largely in test/dev.  About the time it was entering into production environments, we were also seeing significant uptake of widely adopted 64-bit x86 processors. Most applications were running on a single box and were 32-bit, single-threaded, single-core, and didn’t need more than 4GB of RAM. Rapidly, the default server was 4 cores and had 8GB of RAM, and those numbers were increasing quickly. The hypervisor improved the extremely poor utilization rates for many sets of applications.

Today, most new applications are multi-core, multi-threaded, and RAM hungry, by design.  16-32 cores per box is normal as-is is 128+ GB of RAM, and modern applications can suck that all up effortlessly, making hypervisors less useful.

Since 2004 Google has adopted running containers at scale.  In fact, they were the ones who contributed back “cgroups”, a key foundational part of Linux containers and hence Docker.  This is interesting because:

Here we are today, with the Veritas Flex Appliance and containers. Containers allow us to deliver an HCI platform with “multi-application containerization” on top of “lightweight virtualization” -  essentially leapfrogging HCI appliances built on a hypervisor for virtualization. 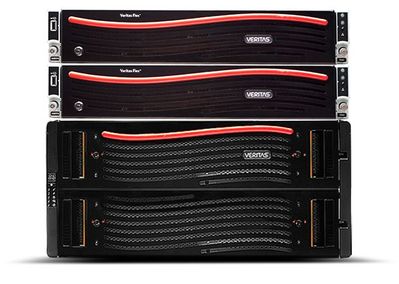 A comprehensive comparison of virtualization vs. containers is beyond the scope of this blog, but I thought I would briefly touch on some differences that I think are key and that help to highlight why containers are probably the best fit for modern, hyper-converged appliances:

Here’s another way to look at it:

What you see here is a fundamentally different approach to solving what might be considered a similar problem. In a world with lots of different 32-bit operating systems running on 64-bit hardware, virtualization is a fantastic solution. In a hyper-converged appliance environment that is homogeneous and running a relatively standardized 64-bit operating systems (Linux) with 64-bit applications, only containers will do.

The application services in the hyper-converged Flex Appliance are deployed, added or changed in a self-service consumption model. They’re isolated from a potential bad actor. The containers and their software services are redundant and highly available. Application services scale horizontally, on demand.

One of the best party tricks of the Flex Appliance that I didn’t touch on above is that containers fundamentally change how data protection services are delivered and updated. With the Flex Appliance, gone are the days of lengthy and risky software updates and patches. Instead, quickly and safely deploy the last version in its own container in the same appliance. Put the service into production immediately or simultaneously run old and new versions until you’re satisfied with its functionality.

We couldn’t do any of this with a hypervisor. And, this is why the Flex Appliance has leapfrogged other hyper-converged data protection appliances.

I also refer you to this brief blog by Roger Stein for another view on Flex.

Comrades, important news for you. If you want to find a way that will help you earn money, then your happy laziness, congratulations. I am opening a site with you with The casinos https://nodepositz.com/jackpot-city-casino/, designed for your life to be better and finally you could afford all your secret desires. Just don't doubt what it really works.

Thanks for the info.