I'm having a problem with Symantec BE  15

when i set the UNC path i shows "the path appears to be invalid." see image 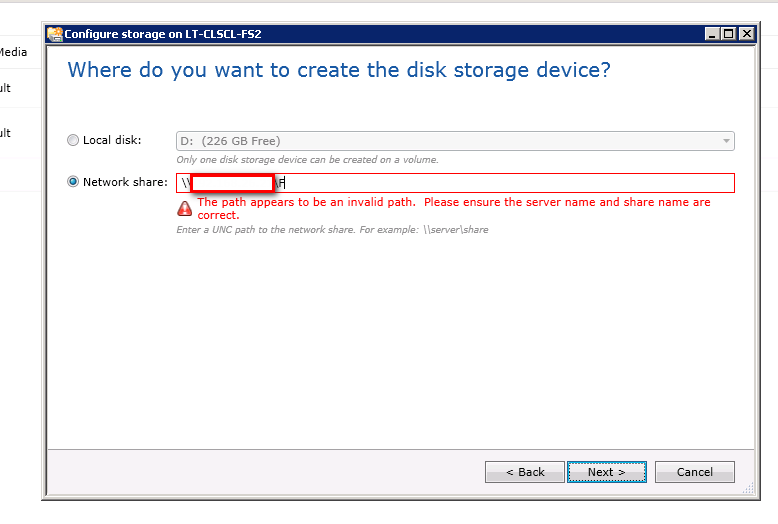 Have you made sure of the following: 1. The media server can access that NAS via IP? 2. That the correct username/password has been added to the NAS to allow the media server to access the share? Thanks!
0 Kudos
Reply

As you are trying to cerate a disk storage target for Backup jobs - then we recomemdn that if your NAS is capable of it you configure it to provide an iSCSI LUN to the Backup Exec server and then use that. The reasons for this recommendation are that it is much easier to configure the connection to the devcie itself AND in theory iSCSI should be a more optimized protocol in terms of performance for storage writes, than CIFs

If you cannot use iSCSI then it gets trickey as a number of things can deny the access:

1) The service account used by Backup Exec is the key credential for access to the CIFs share - so you must be able to login to the operating system console of the BE server itself and connect to the share using this login.

3) Because of point 1 - the NAS will usually have to be added so that it controls security access via Active Directory instead of maintaining its own list of logins.

4) The NTLM challenge response (security) levels on the Operating System of the Backup Exec server may need reducing if the NAS itself cannot support the same level as the OS defaults to.

Note: even understanding the above we have seen environments where customers have just been unable to configure shares on a NAS as a disk target for backups.