DevOps is an approach to software delivery where development and operations teams collaborate to build, test, deploy and monitor applications with speed, quality, and control.

A common problem with traditional software development models is that the software works fine in the developer’s testing environment but breaks when it’s deployed in production. This is typically due to resource differences between the testing and production environments (different hardware, storage, network, application stack, etc). Resources differ mainly in terms of scale and performance, and there are often differences with software configurations and versions. When this happens, the software may behave differently in the test and production environments even though the software itself was not developed with specific dependencies on any of these resources.

The solution: bridge the gap between development and operations environments and ensure they are very similar. This is one of the core principles behind the DevOps methodology.

To achieve this, DevOps environments rely on various tools and practices. One example of this is the containerization of software, to ensure consistency in application runtime environments.

Let’s talk about how InfoScale can help manage data and storage for DevOps environments.

The general objective with storage for DevOps is to provide a data set for testing which is as close to the production data set as possible. To do this, you need to consider the following: 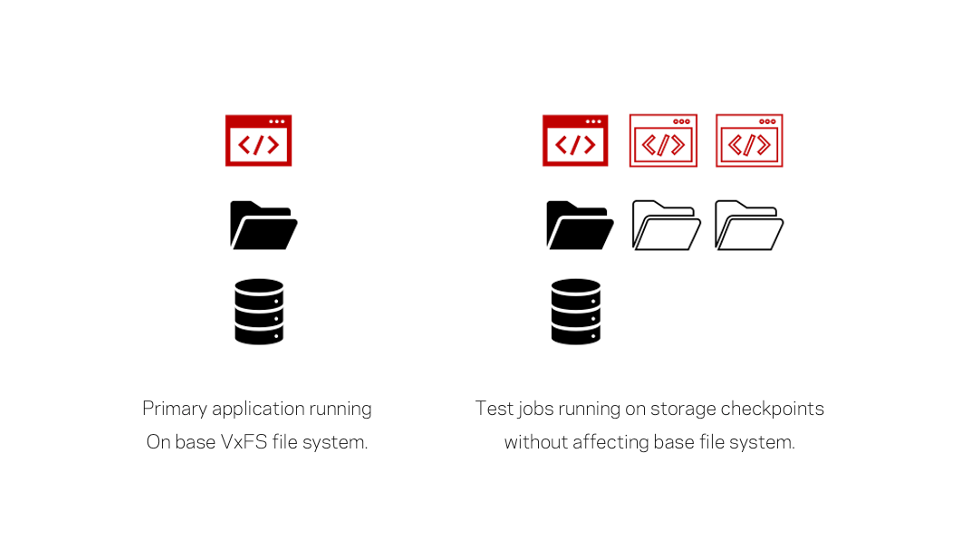 If you’re interested in learning more about InfoScale storage checkpoints and its capabilities, you can find more information in the user guide.   For additional information about InfoScale, take a look at Veritas InfoScale: Managing Mission Critical Applications in a Software-defined Data Center,