Getting familiar with CASO-MBES environments

The system is designed to even support remote offices with limited network bandwidth, however, the faster the network, the better the Central Admin Server Option (CASO) environment will run. While Backup Exec can work with both static and dynamic IP, we have seen customers configure static IP on all media servers for better DNS resolution and more reliable communication.

For more details on the recommendations for configuring and managing CASO environment, refer to the following technote: https://www.veritas.com/support/en_US/article.100018502.

In order to help customers who are relatively new to CASO-MBES environments, we would like to share some best practices around configuring and deploying these environments.

If you are planning to use CASO-MBES environment for the first time, here are a few simple things that can help to set up the environment correctly:

To get the list of open ports and its status, use the netstat command. Refer to the screenshot below. 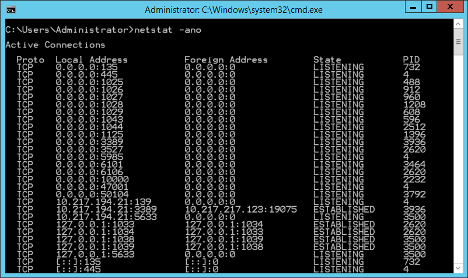 Ensure that the network meets the following latency considerations:

Recently we have seen customer-facing intermittent connectivity issues. DNS resolution was working correctly and exclusions rules for ports were properly configured in firewall and antivirus. We checked for packet loss and found a significant number of packets were lost during communication. There are different tools available to detect packet loss, but we used a simple ping test to detect the issue.

The following screenshot displays the ping command with the echo count option [-n count] to detect packet loss. In the screenshot, for example, 25% of packets were lost with an average latency of 51ms. 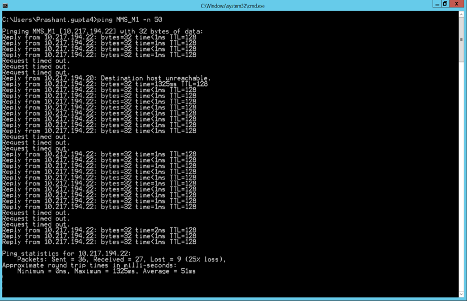 For intermittent connectivity issues, possible explanations to check are faulty network cables, routers, and network cards. It is also recommended to turn off any power-saving settings within these devices.

Stay Up to date

Update the firmware and drivers to the latest version for each server's hardware (SCSI/RAID, HBA, Network Card(s), and so on), especially for cases where a SAN is involved in the CASO setup. Also, confirm that the latest Microsoft Service Pack and patches have been applied to each machine. To check for available Windows updates and patches, run Windows update.

The distributed catalog mode is the default and is efficient and suitable for a CASO environment that uses a wide area network (WAN) or a slow network connection. Replicated and centralized catalog modes are suitable when the environment has a stable, high-bandwidth network between the central administration server and the managed Backup Exec servers. For more information, refer to https://www.veritas.com/content/support/en_US/doc/72686287-139301530-0/v71453368-139301530.